My father wore drugstore watches. He’d buy a watch at the local Rite Aid that had a leather-like strap and take it home, only to immediately replace it with a Speidel band. He never wore a watch of value, or even a watch of substance, regardless of its price tag. He wore cheap, gold-plated watches that never lasted more than a few months and hung in plastic cases from metal rods on rotating counter displays. Then he’d throw them away and start the process all over again and probably still does it to this day.

But… my father always wore a watch.

I started working in the watch and jewelry industry in 1996 and vowed that year that I wouldn’t let the men I cared for go through their lives wearing drugstore watches. In 1999, as a wedding gift to my first husband, I presented him with a Baume et Mercier Hampton – which he in turn also bought for me when we celebrated our first anniversary. In 2005, when my eldest brother turned forty, I flew home to Philadelphia and surprised him with a Movado Chronograph in stainless steel. And so far, the man I’m married to now is the proud owner of three very not-drugstore watches, all of which I’ve given to him on important days in our marriage. But while these stories tell you a little about my background as well as my experience with watches in general, they don’t quite tell you why I’m starting this blog.

Shortly after the 2015 GEM Awards I found myself reading some of the watch blogs that I had only brushed over a few times prior. I started to become more and more interested in watches not just as adornments, but as future heirlooms and frankly, machines. My job back then put me in a different jewelry store in a different city week after week, and during those visits or trunk shows or events I’d find myself gazing at the product, taking pictures of the displays, and if I was lucky, getting to ask questions about the watches. I remember so vividly listening to Burt Wilkinson at Blakeman’s Fine Jewelry in Arkansas as he single-handedly schooled me for twenty-five minutes on the watch brand, Tudor. And I recall picking poor Ben Simon’s brain about Ulysse Nardin, Nomos, and IWC – just three of the names carried in his store, Windsor Jewelers. I listened intently as Mark Hendricks of Lee Michaels in Baton Rouge explained Patek Philippe’s fascinating diamond setting process to me, and I smiled widely as Mike Shields with Moretti’s let me try on his store’s various Rolexes. But the more I saw, and learned, and asked, the more I realized I was alone. Where were the women to teach me about watches? And who were the women who wanted to learn more?

As I set out in search of additional information I found that my favorite watch blogs were also largely written by men, as were most print publications (with a few talented exceptions), newspaper articles, and watch collector forums. This didn’t mean I was learning any less, mind you. On the contrary, I probably understand the difference between a perpetual calendar and an annual calendar because websites like Hodinkee exist (so, if I haven’t said it in the past, thanks, Hodinkee). But after a while, it’s kind of like having your women’s health issues debated in Congress by a bunch of old guys in suits; meaning, yeah, they may know the Constitution and every amendment like the back of their hand, but do they really know what’s right for me?

Later in 2015 I began an Instagram series highlighting Fifty Powerful Women in the Jewelry Industry, and that’s when I realized that there wasn’t a ton of information out there about women holding executive positions in the watch circuit. They hold them, don’t get me wrong – and if you’re one of the women who does hold an executive position and you’re reading this, please don’t be offended – there just isn’t a plethora of information available if you’re someone who isn’t in the watch world who needs to find out about women who are. It was tough, let me tell you, and at the end of the day (thankfully because a couple of the women were recommended to me) I did add a few, but out of fifty, there were not many, and that’s when the gears in my brain started turning.

On October 25th I wrote a piece on my jewelry blog titled, “Girl Time: Desperately Seeking Women in the Watch World” and the response the post received was extraordinary, even making one of JCK Magazine’s Top Articles for 2015 that Didn’t Appear on JCKOnline. The time, pun entirely intended, had come to take this to the next level, and by January, after much deliberation, many conversations with trusted friends, a text or twelve with fellow writers, and the support of my incredibly patient husband, I decided not only to go the route of being a full-time blogger, but to also go forward with my idea for a second blog. One that would focus on women’s watches, men’s watches from a woman’s point of view, women holding executive positions in the watch industry, and women who take their watches very seriously.

That’s the tagline for this – my new blog – aptly named, What’s On Her Wrist. As you can see, “women” come first, which is why I chose today – International Women’s Day – to introduce it to the world.

It is my opinion that the jewelry and watch sectors of our industry will become more and more integrated in the near future, and with this, we’ll be seeing more female faces in varying genres within the field. Last year the Women’s Jewelry Association added a watch category to their Awards for Excellence. This year, Jewelers of America also added a watch category at the GEM Awards. As I type this, a Watches & Women advisory group is being formed ahead of Baselworld. These are all good things that signify good change, and hopefully this blog will not only play its part, but also a significant role in the continuing developments we hope to see down the road, as well as in the present.

As part of this inaugural post I reached out to six strong, powerful, successful, and well-known women with some connection to the jewelry world and asked them what was on their wrists. I’m honored to say that all six were happy not only to share what they wear, but also to share with me images of their watches. 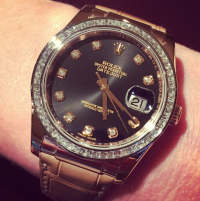 Ruth was given this Rolex 18K Everose gold and diamond Oyster Perpetual DATEJUST by her husband as a gift this year after announcing that she would be retiring from her executive position at the AGS. When I saw her at the GEM Awards she said to me, “I have GOT to show you my new watch,” which is why she was the first person I thought to ask about appearing in this piece. 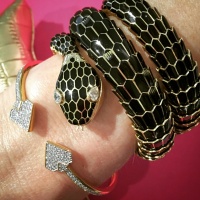 Kara purchased this vintage Bulgari Serpenti in 18K yellow gold, enamel, and diamonds for herself at an auction and wears the watch at least once per week. The watch has inspired some of the pieces in Kara’s new Diamonds Unleashed collection, which donates 100% of its net profits to the women’s empowerment initiatives, “Girls Who Code” and “She’s the First.” The diamonds used in that collection are responsibly mined by CanadaMark in the Northwest Territories, and are tracked from place of origin to polished stone. 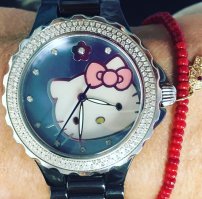 Marie Helene wears what only Marie Helene can wear: a Hello Kitty watch! When I contacted her about this post, she said, “I have to figure out which one to choose. I go from Apple, to Cartier, Corum, Rolex and Kitty” and promised to get back me to in a couple of days with the one she chose to highlight. I can’t tell you how happy I was when I saw this picture. It brightened my day just as the woman’s words do, daily. 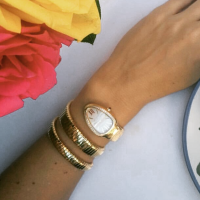 I remembered seeing an Instagram picture of Marion in a watch, so I reached out to her to tell her about this project and see if she’d be willing to talk about what she wears. Marion replied with, “The one and only watch I wear is my Bulgari Serpenti. To me the timepiece is a statement jewel with the added bonus of telling time. When I put it on, suddenly I feel like Elizabeth Taylor on the set of Cleopatra. It does everything a good piece of jewelry should do. It shines. It is a conversation piece. I literally think of the whole history of the design every time I put it on.” For those unaware, Marion wrote a book in 2013 on the history of Bulgari’s Serpenti collection. 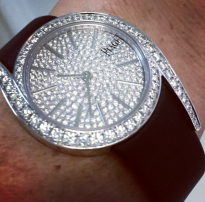 My guess was that someone who had been named one of the most powerful people in business by The Financial Times and Fortune Magazine, as well as one of the 100 most powerful women in the world by Forbes, wore a watch. Thankfully, I was right. Mindy Grossman was kind enough to get back to me with a picture of a stunning Piaget diamond watch bought for her by her husband, Neil, after initially telling me, “My biggest challenge will be deciding which watch to pick. I love watches and agree that a lot of focus is on men.” 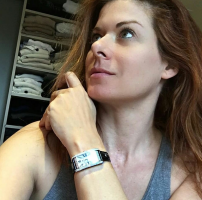 I sent Debra a message yesterday letting her know about my new blog and asking her if I could use a picture I had found of her wearing what appeared to be a pretty nice watch. She replied with, “That’s a costume watch. I’d rather it be one of my personal ones.” She then included this picture of herself with her diamond Maurice Lacroix. When I thanked her for taking the time to send it she said, “I love watches. An obsession of mine. Wanting a deGrisogono with the stingray strap next!”

I hope you enjoyed what you just read. Stay with me as I travel to Baselworld next week to bring you the best in women’s watches with a little side of fun. This may prove to not be your typical watch blog, and the technical details that are found on other sites might initially take a back seat to my quirky world view, but I promise it will at least fill a void and hope that you’ll join me as I learn more on this journey.

As one of my favorite literary characters exclaimed…

“I’m going on an adventure!”

So lovely! I love what you’re doing and can’t wait to follow along on the journey!! Major street cred, already!

Congratulations on your new blog! Loved reading it.

Can’t wait to hear about your adventures in Basel!

I’m so proud of you launching this much-needed blog. I know I will learn so much, and as always…enjoy your personal take on things. Yay!

Well done! I love your take on the world of watches. Women of the world are going to enjoy your perspective.

Nice blog. About time women had a place to read about watches designed for them. Almost all blogs and magazines are geared towards males. My daughter is a WIS and makes her father proud. As a forum owner and WIS, welcome to the world of horology. A link at the forum to this site is here http://watchlords.com/forum/viewtopic.php?f=40&t=33022

Feel free to drop by.

[…] coming up with the loose idea for the blog in October of 2015, I set the wheels in motion and wrote my first official post on March 8th of this year – a mere two weeks before the start of Baselworld – and, while the […]