“Oui, Madam. With gas or without?”

My first experience with the European carbonation situation was on a trip to Italy and Switzerland in 2003. In American eateries, tap water is largely served with meals and no one questions or thinks twice about it. In finer restaurants, the server may very well try to upsell you the twenty-dollar table bottle of San Pellegrino so that you’ll feel fancier while simultaneously becoming poorer, but overall, the U.S. likes their still/flat/tap water just fine, thank you very much. However, it took sitting at a café in Lugano for me to realize that other parts of the world do it differently. That is where, on a sunny April afternoon just two days after my thirtieth birthday, I was first offered the option of either aqua gassata (carbonated) or aqua naturale (non-carbonated) water, and that is when I truly understood how much Europeans – and particularly the Swiss – value food, drink, outward appearance, and tradition so much more than we Yanks. Even now, nearly fourteen years later, as I peregrinate to cities like Geneva, Switzerland and to events such as the Salon International De La Haute Horlogerie (where timepieces are clearly focal), that evaluation becomes clearer – flawless even – not unlike many of the diamonds used in the extraordinary watches those same cities put forth to the world.

Carbon was an element mentioned in a few of the press presentations being held at this year’s SIHH. NTPT Carbon is a signature feature in a couple of Richard Mille’s collections (both for men and now women) and Roger Dubuis introduced their Excalibur Spider Carbon watch, which received high accolades from both press and collectors alike. But it was the watches made with the natural, concentrated form of pure carbon that I found myself most enamored with; ones decorated with that metastable allotrope of carbon in which atoms are arranged while in the Earth (or, more recently, a lab) in the form of cubic crystals. In other words: diamonds. I was, after all, born an April baby.

The value of diamonds can be traced back to centuries before Christ when talks of trading the gem in India were scribed in the Arthashastra of Kautilya, and mentions of Golconda serving as a trading center for the gemstone were written in 3rd century descriptions (according to Wiki, that is). Diamonds today are still the number one choice for engagement rings worldwide, largely due to the belief that they symbolize strength, transparency, wealth, and eternity. And it has been said that the first modern form of wristwatch created (by Patek Philippe in 1868 for the Countess Koscowicz of Hungary) was an ornate diamond-accented piece originally intended to be a form of decorative jewelry. Now while this little history lesson may do nothing but make you double-check the website URL to confirm you didn’t click on a link for your local PBS station, it is meant to be a prologue to the three exemplary diamond timepieces for women that were introduced to me in Geneva, and that I’m about to describe to you below. 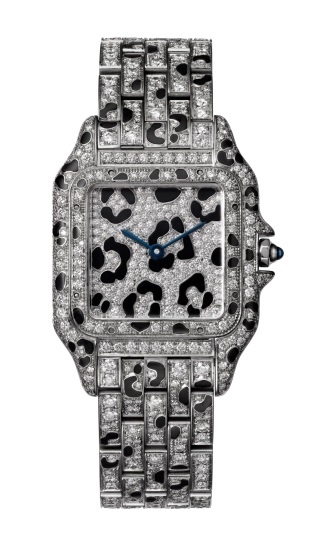 This year’s SIHH saw a relaunch of Cartier’s famed Panthère collection watches (originally launched in 1983) and my inner Alexis Carrington Colby went reaching for a crystal flute filled with Veuve Clicquot, for several celebratory reasons. First (and most important), because Cartier made very clear that they would be putting a lot of emphasis on women’s watches in 2017, which, if you’re a woman like I who has been vocal about how some of the brands are missing an opportunity to market to the female self-purchaser, makes you feel like the watch world has been listening to the chatter. Second, because the Panthère de Cartier is an iconic watch that spans eras as well as genres and because you don’t have to take out a second mortgage on your home in order to buy one for yourself (the small version [sans diamonds] in stainless steel retails for $4,000 USD). And finally, because Cartier is offering the medium version of the watch in 18K white gold, embellished almost entirely with round brilliant cut diamonds and black enamel “spots.” Trust me when I tell you that this model is not just feline… it is fabulous, fun, and downright feminine.

The bracelet of the Panthère – the feature that originally attributed to the watch’s name – still moves and flows with the same slinky ease and elegance as it did when first introduced in the eighties. And as of this June, the series will be released not just in the diamond and enamel version pictured here, but also in yellow gold, white gold, two-tone, and stainless steel, with diamonds or without, in both small and medium sizes. If you want my advice though, go with a diamond version when it comes time to make your selection. The ghost of Cally Harper Ewing will be sorely disappointed if you don’t.

When I stepped foot into the main hall at my first ever SIHH I knew I would leave the event a changed writer, but what I wasn’t expecting when I entered the booth at Van Cleef & Arpels was to leave that press conference a changed person. With twenty-one years in the fine jewelry industry under my belt I’m proud to say that I’m still not jaded; the craftsmanship, creativity, and soul that goes into making an extraordinary piece (be it jewel, watch, or otherwise) still moves me from within and can – at times – bring me to the brink of tears. As I sat under an augmented reality sky with virtual butterflies fluttering above my head, I watched a movie about the making of the Automate Fée Ondine; Van Cleef & Arpels’ first Extraordinary Object. The project – a collaboration between the Maison, automaton maker François Junod, and numerous craftsmen – depicts a fairy perched upon a lily pad who awakens from her sleep as the petals of the adjacent flower open to greet her. The animation of the various elements of the mechanism (which oh, by the way, also tells time) were fluid in movement and the characters in the form of the fairy and the nature surrounding her were realistically portrayed, even though they were made up of metals, gears, precious gemstones, and enamel. It was unlike any time-telling creation I’d ever set my eyes on, and I knew that if the Maison put this much care into a clock that their watches would be no less remarkable.

The Cadenas watch was introduced by Van Cleef & Arpels in 1935 as a way for a woman to wear a timepiece in public without being considered inappropriate (I mean, can you even IMAGINE??). “Cadenas” means “lock” in French and the collection has been a permanent fixture in the company’s watch line since its inception. For 2017, however, the Maison added to the Cadenas collection by introducing two new versions: one in pink gold with rubies; and a stunning white gold piece (pictured here) set with brilliant cut diamonds and perfectly matched, vivid green Princess cut emeralds. This was easily one of my favorite diamond watches of the 2017 SIHH and one I’m quickly adding to my ever-growing, “what I’m buying when the kids go off to college” wish list. 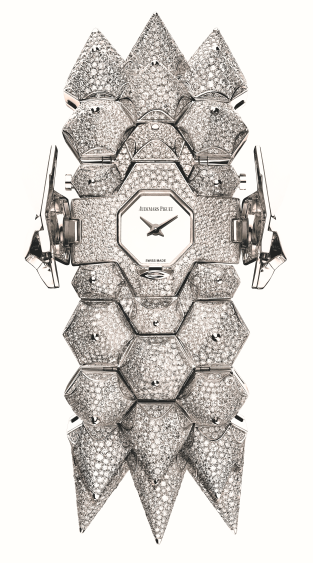 If the Panthère de Cartier brought you back to a time when shoulder pads were queen and you wore your nicest silk blouse to fight your mortal enemies in a pool, then this next watch will have you longing for the days of slam dancing, broken-in Doc Martens, and Tuesday nights at CBGB.

The Diamond Outrage by Audemars Piguet is the third and final installment in the brand’s Haute Joaillerie Diamond cuff watch trilogy for women, and in this writer’s opinion, AP saved its fiercest for last. Embellished in 9,923 “snow set” round brilliant cut diamonds totaling just over 50 carats, and 354 invisible set baguette diamonds totaling roughly 15.85 carats, the watch is a stunning example of jewelry craftsmanship and intricate gemstone setting techniques. Described during the press conference as being an “explosion of stalactites on the wrist,” the watch very well could double as a form of defense should the wearer find herself in a situation where the mosh pit is getting just a little too out of control. And while the Outrage may not tickle every watch wearer’s fancy, there is no denying the looks of amazement on the faces of those I saw feast their eyes on the watch in person. It was awesome, in the truest sense of the word, and I doubt there is anything else like it in the world.

There is no shortage of tag lines, clichés, and marketing mantras to describe a diamond’s importance as it pertains to luxury, and in my humble opinion, not every watch – more specifically, not every ladies’ watch – needs to be decorated with diamonds in order to make it more appealing to a female audience. But for the three watches above, diamonds – very simply – work. And when something works, there’s no reason to meddle with it.

Thanks so much for reading and more coverage to come soon from the 2017 SIHH in Geneva.

This entry was posted in Uncategorized.