A Roll of the Dice: The Story of My First Encounter with Jean-Claude Biver

“The only way to break out is to gamble.” – Jerry Jones

Maybe it’s because I’ve been there for work about four or five billion times (or so I’ve felt). Maybe it’s because “fake” isn’t my thing, so the fake city, fake Eiffel Tower, fake cheekbones, fake sculptures, and fake fun doesn’t really appeal to me. Or, maybe it’s because paying $27 for a mediocre gin martini presented to me by an obsequious “mixologist” seems, oh, I don’t know, like something Dean Martin would be really pissed off about if he were alive today. But man, I REALLY hate Las Vegas. Hate hate it. Like, how my eight-year-old daughter hates green foods, or like how Canadians hate the word “hate” because let’s be honest, in their minds, it could just as easily be replaced by the word “like” in any sentence. But on this night, I found myself in Las Vegas, three months into writing this here watch blog, and two glasses of wine into the COUTURE Show opening party at the Wynn hotel, sponsored by none other than LVMH watch brand, TAG Heuer.

One doesn’t have to be a WIS to know the back story of Jean-Claude Biver; one simply has to be somewhat literate and hopefully have a pulse to be even vaguely aware of the watch world giant. By the time I made the decision to take my writing over to the watch side, I’d read my fair share of articles and heard my fair share of stories of the man who many describe still as “larger than life.”

I remember just having wrapped up a conversation with Scott Saunders of London Jewelers when Mr. Biver was introduced, before he graciously took the microphone as he stepped on to the COUTURE Show stage. His remarks seemed quaint to me at first; simple, and yet substantial. Everyone in the crowd stood still, patiently hanging on to JCB’s words which were becoming more intense by the second.

“ALL YOU NEED IS LOVE!” he finally exclaimed loudly into the mic, giving credit to the Beatles for a line that even the millennials in the room

would recognize. Love. He was yelling about love. Here was a man so bold, and so recognized, and so successful, and he was talking to a room full of jewelry and watch people about a universal emotion as simple – and as complicated – as love. About the power of love. About the positivity of love. And about love’s effect on everything we do in our lives and every decision we make. “All you need… is love.”

By the time he left the stage, the room acted as if it had just witnessed a modern-day prophet perform a miracle for the ages. People were cheering so vehemently I wondered if Mr. Biver would actually come back out and sing “Freebird” while we all swayed and raised our cigarette lighters. It was astonishing to witness and awe-inspiring at the same time. I wanted to start hugging strangers in the room and tell them I loved them (but I didn’t because when you do that in Vegas, people get the wrong idea about what you actually do for a living). I was invigorated, and felt kind of… well, lucky… and when you’re feeling lucky in Vegas there’s really only one place to go…

Vegas was built for a reason, and that reason was money, and money alone. Gambling is the fabric used in the tattered quilt that blankets the city, and to go and not gamble even once seems almost sacrilegious, so I decided to head inside to the Wynn’s grand casino and take my chances at the tables.

The sounds of coins falling and bells ringing are synonymous with Vegas. The smell of a casino floor can’t be replicated – nor should it – as the lingering feelings of both hope and despair hang tauntingly in the recycled air. Yet as I strolled through the crowds of thirty-something bachelors and their nightly rent-a-dates toward the blackjack area, I could see a figure walking quickly toward me in the mix of what would appear to be an entourage.

It was The Prophet, himself: Mr. Jean-Claude Biver.

I’d never met him before, nor had I met anyone in the watch world who held a position such as his. I was new still, and green, and honestly, I didn’t know crap about the industry. But he was headed my way, and I knew that if I didn’t at least tell him that I liked his speech, I’d lose an opportunity I might never get again. But what happens if I stop him and he wants to talk watches? I can’t fake it! Vegas or not, I suck at bullshitting.

The more I thought about it, the closer he got, and when he had just walked past me, I idiotically blurted out his name.

He turned toward me, almost startled, and his people turned too. 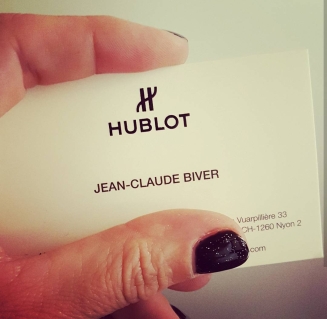 “I’m Barbara Palumbo. I write a watch blog called WhatsOnHerWrist. It’s sort of focused on women. I’m a fan though, and I saw your speech, and I just wanted to meet you.”

He smiled his wide, toothy smile as he walked back toward me and took my business card from my outstretched and slightly shaking hand, before reaching into his pocket and handing me his in return.

We spoke for a few minutes, once I calmed my nerves, and he told me to email him any time if I had any questions or needed anything. Then he shook my hand, and he and his people walked off into the desert night while I stood there staring at the plain white business card which bore his name.

Upon my return home to Atlanta, I wrote a recap of my experience at COUTUREtime and decided to take Mr. Biver up on his offer, so I emailed it to him, and to my surprise, received a reply within the hour:

“Hello Barbara, thank you for your email and article! I enjoyed reading it and could imagine you enjoying writing it. Hope to catch up with you soon.”

It was, for someone like me, a moment I won’t soon forget.

You see, I guess I’m still green. I like people who are nice to me; who take the time to mentor me, and do right by me, knowing that I’m in this to learn, and that no matter what happens, or what road bumps I hit, I’m not giving up. I like writing about brands who employ good people; positive people. I enjoy sharing their stories because this industry is about more than mere material possessions with a history. Watches ARE their people. Watches wouldn’t exist without their designers or their creators or their marketers or sellers or CEOs or those, like me, who tell their stories. And this simple moment – this gamble that I took in Vegas at the very beginning – put me on the right mental path, because it showed me that someone as important to the watch world as Jean-Claude Biver was willing to take the time and share a kind word of support with someone like me, who was just starting out.

So, to you, Mr. Biver, I say “cheers” today. Cheers on celebrating your 69th birthday, on celebrating forty extraordinary years doing what you seemingly love, and on deciding to take time for you in a different way than you had been recently. We know that you’re still around for those of us who have questions or need anything, but speaking for myself, you already gave me what it was I needed.

Thank you, sir. I guess that’s really all I wanted to say through this story. Merci.

3 thoughts on “A Roll of the Dice: The Story of My First Encounter with Jean-Claude Biver”

Thank you for reading, Eric, and for also being one of those who had kind words for me from the beginning.

Congratulations on meeting such a generous and gracious man! It’s inspiring.